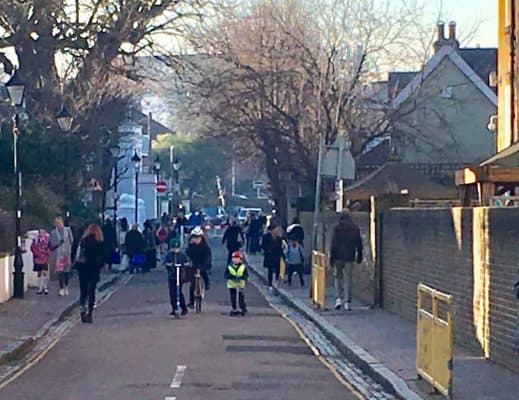 Update on the 29th June 2020
A big day as, thanks to some fab “community volunteers” from Extinction Rebellion in Putney, the first half of the school street is up and running and the kids are able to finish their journey to school with no cars.
Not only that the school street has extended round the corner into Clarendon Drive to the corner of Gamlen road after the Eileen Lecky clinic & the RSPCA hospital were consulted. This is a safer and more logical boundary for this end of the School street.
More good news is Wandsworth council hope to have official signage up & provide barriers later this week. Reaction from the schools, parents & residents has been all positive with a little curiosity mixed in!
Update on the 22nd June 2020
All 3 schools have now signed letters supporting the proposed school street and interim street closure for Covid distancing measures. These have been forwarded to Wandsworth council.
A 2nd council officer was appointed to work on this today but has not yet made contact.
The next challenge will be to accelerate the council’s definition of “urgent” to ensure that vital temporary barriers to allow safe distancing are in place promptly and well before the summer term end in mid July.
On the 5th June 2020 all 3 primary schools on Charlwood road gave verbal backing for a school street and an application has been made to Wandsworth council. In order to meet social distancing requirements Wandsworth council have been asked to provide temporary measures urgently to close the road at pickup and dropoff times while a school street is planned.

What is a school street?

The streets around a school temporarily become pedestrian and cycles only at set times in the morning and afternoon. Vehicles are not permitted to enter the street between these times unless they have been granted an exemption.

The Details of operation ( recommended )

What does a school street setup involve

1 Passive signage with no physical barrier or enforcement

Who can set up a school street

School streets are set up by local authorities after requests from schools and parents in their area. Local residents and businesses are also consulted before a school street can be implemented.

Other stakeholder include city mayors and Sustrans.

Where are existing school streets located

School streets were first introduced in the UK in Scotland from 2015. Since then several London Boroughs including Hackney have introduced them on a trial basis.

Is a school street anti car?

School streets are employed for short periods when far more people (children and parents and commuters) are on foot or bicycle than in vehicles.

It is a pragmatic way to allocate road space according to demand.- if 80% or more of the available width of a road is allocated to road surface and yet under 20% of the people users are in vehicles then road space should be allocated logically. Much the same happens already when roads temporarily close to allow fans to leave large sports events.

To get acceptance from residents and drivers the inconvenience has to be minimized. It should be clear at a glance whether the school street is in operation and they should never be in operation when not needed.

School streets tackle congestion close to the school gates, making it easier and safer to walk scoot and cycle to school.

Encouraging healthy ways to get to school that don’t involve driving and promote exercise and healthy activity is a priority for children’s health. If children and parents feel the experience of getting to school is safe and relaxing it is more likely to become more popular.

Improving Air Quality for children on the way to school

Air quality refers to the air around us, how clean it is and how many pollutants (harmful chemicals or substances) it contains. The more pollutants the air contains the more air pollution there is and the worse the air quality is.

Children are one of the groups particularly vulnerable to the impacts of air pollution and many family cars are diesels which on average are over 10 times as polluting as even a petrol car. Air pollution:

The 3 school “School street” – an example proposal in Putney SW15

Putney in SW London falls under Wandsworth Council who have recently asked local schools if they would like to have a school street. 3 Schools have put themselves forward for one school street each. We hope this further proposal to join 3 primary schools with a single school street will also be considered. Wandsworth have provided an update on their plans here

The 3 primary schools are on a road that is not a through route between lower and upper Richmond road because of a barrier already in place. Nevertheless enough vehicles drive up the road to prevent safe pedestrian use. There is more traffic between Felsham and Hotham road ( around 2 vehicles a min) and between Hotham and Clarendon around 1 vehicle every 2 mins.

Location of the proposed school street

The school street would be on Charlwood road, from Felsham road to Hotham road and then from Hotham road to Clarendon road. Traffic would continue to be uninterrupted on the cross streets of Felsham, Hotham and Clarendon drive.

Reasons for the 3 school “school street”