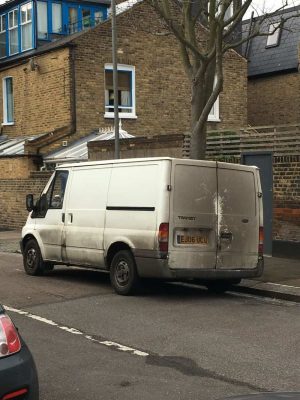 The timing of the ULEZ rollout, especially the inner zone in April 2019 will push businesses to replace old diesel vans with dirty but exempt Euro 6 diesels rather than the wider choice of affordable zero emission long range EV vans due by 2021.

Allowing most of the ULEZ fees paid by diesel van drivers over the next 24 months to be credited against the purchase of a zero emission EV van or a plugin petrol hybrid van. Of the potential £4,562 in ULUZ charges per yr up to £10 of the £12.50 would be credited – or up to £3,650 in one year or £7,300 over 2 years. The exact credit would reflect the charges paid for the particular diesel van being replaced. Requiring scrappage of older vans should be considered.

By contrast the much publicised diesel bans in Germany are less rigorous in enforcement, selection, penalties and areas covered.

The problem the ULEZ may cause

The ULEZ is set to be a well implemented effective way to cut illegal levels of  air pollution in London and serve as a template for improving air quality in other areas.

It does cause a problem though. Around 90% of diesel vans are pre Euro 6  and therefore will be liable to the charge. Used every day of the year would cost £4,526 in ULEZ charges for these polluting vehicles. Which will drive 2 waves of purchases of new vans that are exempt from the charge.

The clean vans are nearly here – but not quite

There are some petrol vans as an alternative to diesel but these could produce more CO2 and are less efficient on a heavy vehicle.

There are also a few Electric vans available but most are very expensive and have real world range of under 100 miles.

Van makers have woken up to the issue and better value longer range models are on the way – but the timing is set to be just after the first wave of sales triggered by the ULEZ – and some will be about the same time as the second wave when the ULEZ is expanded.

The first major petrol hybrid launch will be the Ford Transit in September 2019.

Longer range EV models from Ford and VW are due in 2021. It would be ironic if the ULEZ forced business to replace old diesels with new ones that will be on the road for 10 or more years – when a wide range of zero emissions vans were so close to being available.