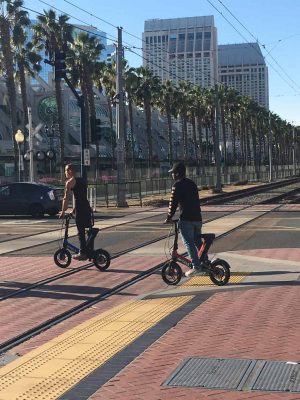 California goes electric – but not how you think

The state of California is the biggest market for cars in the US and trends and regulations here often later become the norm in the rest of America and around the world.

When the US Federal Government doesn’t set proactive rules for safer cars, cleaner cars or quotas for EV cars the state of California isn’t shy about creating its own rules to bring about progress. In the case of minimum EV sales mandates 10 other states have followed California’s lead. In fact despite being a state within a country, California is more able to take it’s own path than EU countries are. So how are they doing on the ground. Well, a business trip provided a bit of a surprise.

While Los Angeles and San Francisco provided the expected number of Teslas cruising around the surprise for me was electrification on a much smaller vehicle down in San Diego.

While many older Americans remain wedded to cars, bloated trucks, SUVs and public transportation like the San Diego Trolley, younger San Diegans & tourists alike who had previously dumped taxi’s for Ubers are now dumping Uber’s for little EV scooters. They are tremendous fun, cheap efficient and widely available to unlock and drive all over the city. The market is dominated on the streets by Lime and Bird scooters. Seemingly similar Razor scooters were lying around in flocks unused.

If you count these on the road scooters with a top speed of around 15mph as vehicles these are now probably the most common vehicle type in the centre of the  city.  They are joined by some slightly curious looking EV bikes without pedals and an oddly low seat. Many people ride these scooter style standing up – possibly as the low seats don’t look cool. If the seats can be set higher no one seems to have figured out how. Finally there are some 4 6 and 8 seat EV golf buggies that also offer rides.

The visiting under 40’s having taken to these mini EV’s with enthusiasm. The carbon footprint should be tiny although it has to be said some of these rides are also replacing walking as well as car rides. Bicycles that you pedal seem to be a much rarer sight. I suspect if or when scooters are permitted to join cyclists on the roads of London a snowboarder/ skier type tension could well develop.

Downsides? Well there are a few. The scooter riders take a very relaxed view on traffic and drinking regulations and some are too stupid to see the obvious danger posed to themselves and pedestrians by zipping at high speed along pavements past busy bars, shops and restaurants. Doctors at A&E that receive custom due to polluted air from diesel fumes in London swap this for a steady stream of sprains, breaks & other accident injuries from these little zero emission wonders. In 4 days I didn’t see a single rider (out of hundreds I saw) wearing a helmet. Conversely most were driving on the road or on the boardwalk in a perfectly safe way with big grins on their faces.

It seems doubtful that the scooters will work as well in a big city with heavy traffic, hills, narrow streets and bicycles. Indeed London’s Metropolitan police made clear in late 2018 that electric scooters are illegal to ride in London on roads or pavements.

That said for smaller towns, holiday resorts with warm dry weather or areas where traffic is restricted, these could replace full size vehicles for many trips. They are undoubtedly a fun way to get around.

While London won’t be seeing a scooter revolution like San Diego they are becoming a common site in cities like Lisbon – curious as the brakes are not the scooter’s most effective feature and most of Lisbon seems to be on a hill.

London is getting the same “pick up and leave anywhere” app based technology both for pedal bikes and more recently electric bikes. While some cycling purists may not approve, public EV bikes should broaden the appeal of 2 wheel travel. It is important they don’t exceed the speed and size parameters of a bicycle though. Arguably renting an electric bike makes more sense than buying one – it should always be charged when you pick it up, you don’t have to find room to park it safely or worry about it being stolen.

Sales of petrol scooters in Europe are already being overtaken by electric bikes in europe and while EVs on 4 wheels get more press coverage, the EV revolution on 2 wheels has been quicker off the mark and deserves just as much attention.