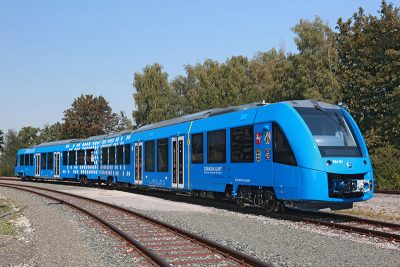 How hydrogen fuel cells could replace diesel on our railways

UK announces work on converting up to 100 diesel trains to run on hydrogen.

Contents hide
UK announces work on converting up to 100 diesel trains to run on hydrogen.
A Rail Opportunity for hydrogen?

Hydrogen fuel cells look like being betamaxed by the sheer scale and pace of investment in EVs and their battery technology on our roads. While EV charging points appear in hundreds and thousands, outside of Japan hydrogen offers few models to buy and fewer places to fill up.

Hydrogen requires either a relatively inefficient process to produce from electricity (which may or may not be low carbon) or be produced directly from a process that relies on fossil fuels. This means it may be restricted to niche uses where EVs using batteries is not effective. This is discussed in this September 2018 piece by Michael Liebreich from BloombergNEF.

A Rail Opportunity for hydrogen?

Could hydrogen be more successful on our railways? Large parts of the UK and international railway network are not electrified. While some countries like Switzerland have fully electrified networks most countries rely on diesel trains for local services and even mainline routes.

Electrifying existing rail lines is fraught with problems as Network Rail has found out with its project to electrify the Great Western Railway. While installing 7,000 masts and power cables is in itself a big task, doing it on a busy working line where most work has to be done overnight makes it fantastically expensive with an £800 budget now at £2.8B and counting. And the power has only been turned on as far as Maidenhead. The solution, Bi Mode diesel electric trains leave new electric trains carrying a diesel engine to use on most of the route.

So how could hydrogen help on the rails.

While the hydrogen fuel cell train is not due to enter service until next year most of the technology used has been in used before, just not in combination.

”For the first time worldwide, a hydrogen-fuelled passenger regional train will replace diesel trains, generating zero emissions with the same performance as a regular regional train’ Electrifying diesel routes without masts or cables could make a cleaner, greener railway much less expensive to deliver. The article from Railway Gazette with details on German hydrogen train is linked on the tweet below.