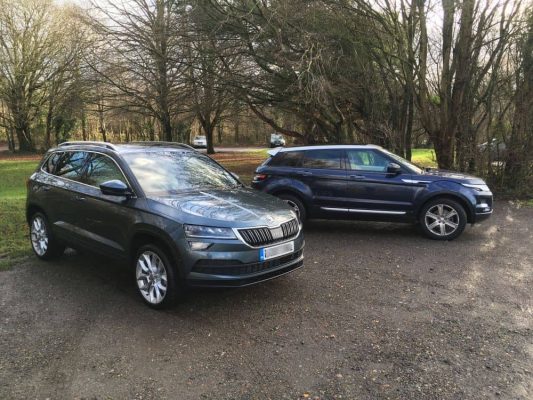 Can you switch from your polluting diesel and cut CO2? Going from tech level zero to level 4.

How easy is it to clean up our emissions? Going from tech level zero to level 4.

Contents hide
How easy is it to clean up our emissions? Going from tech level zero to level 4.
Now some in the car industry argue if we don’t continue buying dirty diesels then CO2 will go up and we will be hit by climate change. It’s sometimes known as the “die now or die later” argument with the industry backing the former.

When I set out to cut my contribution to poisoning our urban air I knew in one sense that I’d made life easy for myself. I’d started with a car that turned out to have one of the dirtiest car engines on the road.

The Ford derived 2.2 diesel in my much loved Range Rover Evoque put it into group H in the Emissions Analytics Equa index for NOx pollution – around as polluting as 25 petrol cars! It was a bit of shock that this beautiful car did so poorly despite a relaxed 9 speed automatic gearbox and stop start to cut the engine in traffic.

Stop start on a non hybrid turns out to be a bit of a disappointment for improving air quality. For a start it was the one part of the Evoque that never worked reliably. When it did it added at least 5 mpg in London traffic making the 4×4 Evoque more economical than the BMW 330D I had before.
The weak-point in all these systems though is the battery. Unless you turn off the aircon (fine when it’s not cold or wet!) you’ll be lucky if the engine manages to stay off for more than 30 seconds at a time. Fine at a lone short traffic light in the Scottish highlands but not much good if you’re stationary for 20 mins or more in London traffic.

There are lots of Euro 6 diesels on sale that are much cleaner than my Euro 5 Evoque. Amazingly there are also some Euro 6 diesels that are dirtier. There was such effective lobbying and abuse that Euro 6 tells you almost nothing about a cars emissions. On average they fail the test by 5x when you put them on the road. On average one Euro 6 diesel is as polluting as 7 petrol cars. So switching to a petrol car would reduce my emissions by 96% or more… while a plugin hybrid or EV could reduce it by up to an extra 4%

Now some in the car industry argue if we don’t continue buying dirty diesels then CO2 will go up and we will be hit by climate change. It’s sometimes known as the “die now or die later” argument with the industry backing the former.

The funny thing is though.. the average official CO2 for petrol and diesel cars is pretty much identical. Around 121g per car in the UK. The other funny thing is the highest CO2 comes from mainly diesel SUVs which average around 142g. (See tweet)

Greg Archer from @transenv explains why the SMMT is just blowing (toxic) smoke when it claims CO2 from cars is rising because of falling #diesel sales. https://t.co/7yQ9Ygibfl

So SUV’s are bad? Well not necessarily. SUV’s have a higher average CO2 because they are they are usually taller, wider and much heavier than an average car. 4 wheel drive systems also tend to push up CO2. So ironically the slightly more efficient diesel engine has encouraged people to buy bigger heavier cars that are less efficient – and produce more CO2. Carmakers are now selling midsized SUVs like an Audi Q5 that are longer than the original 5 door long wheelbase Range Rover. Positive whales of a car like the Audi Q7 would not have existed without diesel. 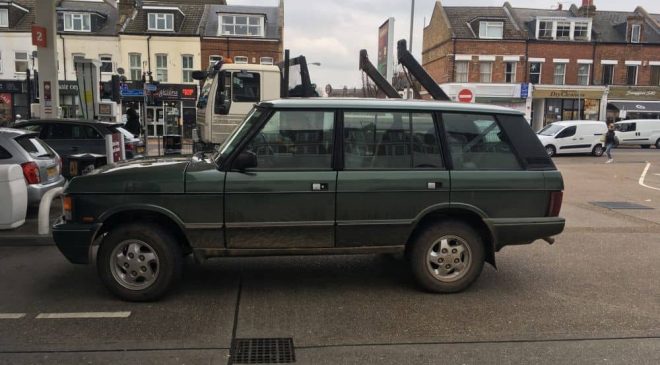 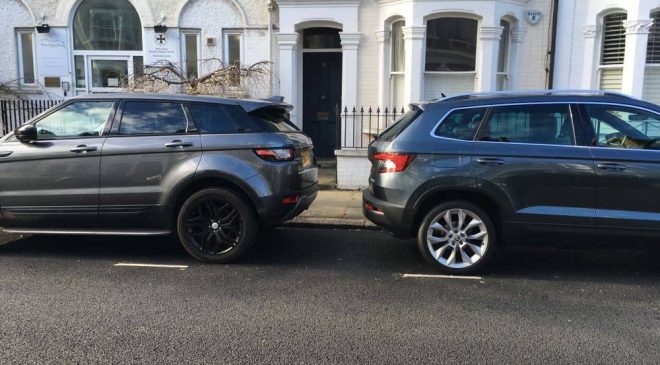 In the end after flirting with a BMW 330e hybrid saloon ( I ordered it in May 17 but after a catalogue errors BMW finally said it might arrive by Christmas!) I picked a petrol SUV. Its NOx should be over 97% lower than the Evoque but despite also being a petrol automatic SUV and the same size- its mpg is almost exactly same and its CO2 is 19.5% lower.

In the end I setted on a Skoda Karoq in edition spec that has a remarkably similar equipment spec to my Evoque. It’s performance is also comparable and it’s also an automatic (7 speed dsg). It’s also just as spacious inside and has about double the boot space (officially in smaller but In the real world it’s not…don’t ask!). I will be doing a comparison review soon.

So how does this same size SUV, petrol Skoda Karoq have lower CO2 (down from 159g official to 128g) than the diesel before it? Well it has a clever efficient new 1.5L Tsi engine and only 2 wheel drive..but mainly it’s much lighter – around 300kg less ( thats about three 16 stone rugby players less!). Now 128g of CO2 isn’t ultra low but it does show you don’t have to die now – by making the air in urban areas toxic – to reduce your CO2.

We will all be in zero emission EV’s in a few short years powered by renewable power. But in the meantime you can stop poisoning city air with stinking diesel fumes – and still lower CO2 even with a petrol car as long as you don’t buy a much bigger heavier car than you really need.